In the 1960's, Djuro Basler uncovered Paleolithic sites in Northern Bosnia. While surveying the uplands and river terraces between the Ukrina and the Bosna River Valleys (two southern tributaries of the Sava) he identified remnants of late Pleistocene loam deposits which contained layers of Paleolithic artifacts. The sixty some localities Basler was able to identified made it possible to construct Paleolithic maps of this vast region at the southern edge of the Central European Plain and the northern end of the Balkans.

Located on the south bank of the Sava River near its confluence with the Bosna River, Kadar is an open air, hilltop site. From there, the view extends over wide stretches of the Sava Valley and the surrounding uplands, an ideal lookout spot for Paleolithic hunters trying to follow the movements of bison and other large game herds.

Basler excavated a large section at the top of the hill uncovering , under the plow zone, a series of artifacts stratified in the upper layers of the loam deposits. The artifacts in place were abundant and left relatively undisturbed by plowing. The cultural affiliation of the site was not immediately recognized: the well made blade tools clearly belonged to a Late Paleolithic assemblage but a lack of diagnostic artifacts prevented a more specific designation. Large sections of the site were still in place after Basler's excavations .

So the site was selected when a joint project of the Museum of Sarajevo and the University of Kansas proposed to undertake a program of systematic excavations in Northern Bosnia. Two seasons were spent at the site in 1974 and 1976. After study, all recovered artifacts were deposited at the Zemalski Muzei in Sarajevo along with duplicates of the field notes. The original field notebooks, lab notes, and photographs are archived at the University of Kansas Laboratory of Archaeology (formerly the Museum of Anthropology). The site itself was unfortunately destroyed by road construction in the early 1980's.

The artifact assemblages recovered at Kadar belong to the Epigravettian with shouldered point best represented in Italy but also found along the eastern shores of the Adriatic, in Slovenia, and Croatia. Dated around 17 000 years ago, the Epigravettian correspond to a relatively mild climatic episode during which people were able to move back and forth across the Slovenian pass.

The Kadar excavations were the case study of an open air site where bones were not preserved but where the organization of stone artifacts and habitation features left by Paleolithic occupants were still recognizable in spite of some post-depositional disturbances.

The blade technology was adapted to the raw material : medium to large cobbles of radiolarite which were carried to the site after little or no preparation. 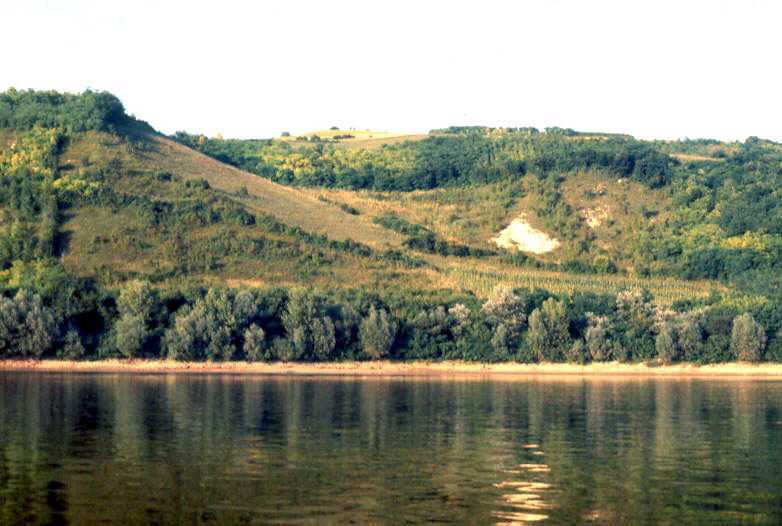 1974
In the 60's, Basler had opened series of adjacent, 4m by 4m units oriented North. All traces of these excavations had disappeared at the start of the 1974/76 project and a new grid was set using an aerial photography benchmark recorded on topographic maps was used to measure elevations (Z) . The approximate center of Basler's excavation was 30m North and 30 m East of the marker used as the datum point. The eight unit block opened in 1974 was to the east of Basler's old trenches (KIEast). Four additional 2m by 2m test pits showed that clusters of artifacts continued to the west but that the archaeological layer disappeared to the south. The first three units (I, II, and III) contained little or no material in place. However, fragments of backed bladelets recovered in the plow zone identified the site as Late Paleolithic. Artifacts were abundant in the loam level (Level 2) of units IV, V, VII, X, and XI where they formed a well defined archaeological layer.

1976
When excavations resumed in 1976, four new units were opened in the area to the west of Basler's trenches where test pits had given positive results. (KIWest). Remnants of a hearth, including burned bone fragments and heat cracked stones, were recovered at the center of sector IWest. Large pieces of sandstones surrounded by fragments of ground hematite and chunks of ocher found at the center of artifact clusters marked an activity area, perhaps used for hide working.

Test pits set 20m apart along the hilltop showed that thin scatters of artifacts covered the whole area to the West of the original site, between the excavations and the edge of the bluff As a result, a new section of three 4m by 4m units (A, B, and C), designated Kadar II, was opened in an area marked by more heavy artifact concentrations (KII). There the upper loam level contained two superimposed archaeological layers which could be identified most clearly in Unit B (see illustration below).

In all areas, the original placement of artifacts had been somewhat disturbed by rain water and other natural phenomena. But displacement were limited and artifact clusters retained some of their original organization. The relative abundance of artifacts recovered in the plow zone of the IEast and IWest sectors suggests that plowing destroyed, or at least disturbed, the uppermost archaeological deposits in these two sectors.

The remnants of Pleistocene deposits still in place on the uplands and terraces of Northern Bosnia are series of loams derived from re-deposited and weathered loess. At Kadar the Paleolithic artifacts were contained in the top 60/70 cm of the deposits.

An erosion surface ( 3 on the profile drawing) separate the topmost loam from the underlying level (4 on the profile drawing). Five or six artifacts showing the distinctive characteristics of Levallois technology were recovered in level 4, in the Kadar I West area. They probably derived from a concentration located nearby. Mousterian artifacts were found in the plowzone of neighboring fields but no layer could be identified in the area we excavated.

The lower beds (below level 4 on the profile drawing) showed more intense weathering and evidence of solifluxion and partially formed polygonal soils. No traces of human presence were recovered in these lower levels.

At Kadar I the artifacts formed a well marked 10cm to 12 cm band in the upper section of level 2. Artifact scattered above the band may (a) have been the remains of an upper layer disturbed by plowing or (b) displaced from the main layer by percolation and other natural phenomena.

The Kadar II profile presented the same sequence as Kadar I. The loam beds were shallower and, more importantly, plowings had not affected the top of the archaeological layers. Two, even three successive layers, all attributed to the Epigravettian could be clearly identified at least in unit B.

Artifact distribution projected on the west wall of KII, Unit A (adjacent to B). There, alterations posterior to the formation of the layer have blurred the stratigraphic sequence.

The absence of bones made it impossible to obtain C14 dates. However, it was possible to get dates by thermoluminescence using burnt pieces of flint. The analysis was conducted at the University of Missouri. The TL dates ranging around 17 000 years ago are in good agreement with C14 dates from other Epigravettian sites of the region. The Kadar occupants were part of a cultural tradition that extended into Croatia, Slovenia and to the Adriatic during a time period marked by milder conditions that allowed animal and human populations to cross from the Adriatic Plain into the Sava Valley.

At the time of the of the epigravettian occupation around 17,000 years ago, the whole region was a cold steppe with pine, juniper and occasional clumps of cold resistant shrubs. The cave sites of central Bosnia contained bone assemblages indicating that a variety of animal species occupied the mountain regions. The steppe was probably the domain of large herbivores.

Rows of bison teeth reduced to the enamel were the only faunal remains recovered at Kadar. Two were found in I West neqar the hearth along with small fragments of burnt bone. And three were recovered in Unit A, Kadar II.

Stone Age hunters probably camped on the Kadar hilltop to survey the wide plains of the Sava River and its tributary, the Bosna waiting for the passage of bison herds.

There, as was the case at many Stone Age localities, the Paleolithic people of Kadar picked up the raw materials needed for tool making in the course of their hunting expeditions. The gravel beds of the Bosna River some 5 to 10 km away still contain an abundance of 10/15 cm long cobbles of radiolarite, a fine grained colorful chert derived from the mountains of central Bosnia.

However, after time passed in or near the river, many cobbles were gel cracked and unusable for flint knapping. As a result, the site was littered with an unusually large number of rejected pieces of shatter. When unaffected by frost, the cobbles provided a fine quality material that required little preparation in order to draw the long and thin blades they used as knives or transformed into other types of scraping and cutting tools.

Their hunting equipment included light weapons tipped with small shouldered points and micro-gravettes points that are characteristic of the 17000 to 18000 years old phase of the Late Paleolithic designated as Epigravettian.

There are two series of data files:

DataBases in Windows Access format are compatible with the PLOT program available here.

Databases can be accessed by clicking on the data base name:
KIEast
KIWest
KII

Each data base includes xyz files and context files.

Provenience information contained in the xyz files include:
Site identification (Kadar)
Unit, identifies the 4mx4m excavation unit as designated on the maps above.
Id, a four digit number assigned to each artifact in the field as they were coded and removed.( Note: In the KIW and KII files Id's are one to three digits consecutive numbers within each unit In the KIE the unit number is included in the four digit id ).
Y: South>North distance from the datum point (Y coordinate) in cm.
X: West>East distance from the datum point (X coordinate) in cm.
Z: Elevation (Z coordinate) distance below the aerial photograph benchmark, in cm.

The context files:
They include, Site, Unit, Id and the artifact type (blade, flake, core, scraper, burin etc...) to produce maps of the spatial distribution of different types of artifacts.

Files in Excel format include besides the artifact type (blade, flake, buin, scraper etc...) the artifact condition (complete, broken, base or tip fragment etc...) and series of descriptive, metrical attributes. Fragments and chips measuring less than 1.5cm are not included in the excel files. Metrical attributes ( in millimeters) are as follows :
length - maximum dimension measured from the point of impact on the striking platform ;
width - measured at the half point of the length axis,
thickness- taken at the same point as width;
platform width- maximum dimension of the striking platform along the width axis;
platform thickness - dimension of the striking platform perpendicular to the platform width.

Note: Measurements were taken in the field lab Records were then transferred to computer files at the University of Kansas where the original field notes are archived.