At the suggestion of Peyrony, Ami excavated a trench in this area that began just above the road and continued upslope in the direction of Abri Peyrony. The size of this trench, which appears to have been quite irregular, is enormous: it is about 35 m in length and varies in width between a little over 2.5 m at the top (i.e. furthest upslope) to a maximum width of about 10 m in its central portion; it is approximately 8 m wide at its base, and with. The average thickness of the archaeological deposits is about 3 m. This represents approximately 700 m3 of deposit, most of which was excavated between 1926 and 1931.

At the base of the deposits in the lowest portion of the trench, Peyrony defined three subdivisions of Level V. Beginning at the bottom, Level Va, about 10 cm in thickness, was composed of reddish calcareous clay sediments; followed by a layer of calcareous gravels (Vb) including some rolled artifacts; followed by another layer of red clay (Vc). The middle levels of the site (Levels II-V) were defined by Ami as arbitrary units within the slope deposits, which probably reflected at least some movement through solifluction. In the middle reaches of the trench, between these middle levels and the bedrock itself, was noted a 80-90 cm level of &eacuteboulis sec, formed by alteration of the underlying Campanian limestone. According to Peyrony, the uppermost Level I (also known as the "Couche sup&eacuterieure") extended only part of the way down the slope, and was composed mostly of brownish sediments and was thus distinguished sedimentologically from Levels II-IV. However, it is also clear that Peyrony (and, according to him [Peyrony 1934b:419], Ami as well) felt that this uppermost level extended laterally over most of the hillslope, including the entire section known as the Eastern Zone. 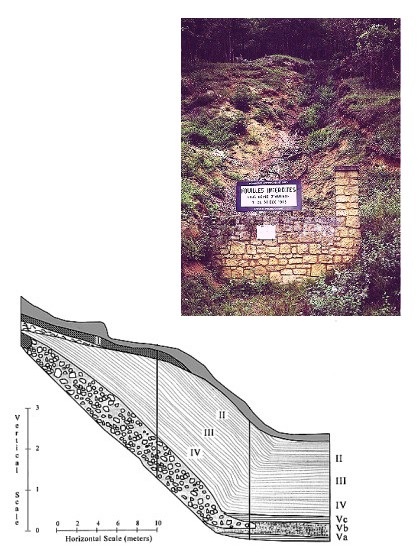