The Abri Peyrony, or Haut de Combe-Capelle, is a south-facing rockshelter located along the same cliff face as the Roc de Combe-Capelle but approximately 50 m to the east. It was excavated by Peyrony in 1925. The archaeological deposits, which were not very thick, were situated on two terraces of bedrock. Based both on Peyrony's description and testing carried out in 1990 there appear to be two levels. The upper level is composed of brownish-red sediments which recall the sediments of the plateau immediately above this locale, while the lower level is composed of grayish concreted sediments.

The rich and highly patinated industry recovered by Peyrony (including many of the pieces that he had originally left in his backdirt and which were later recovered by Paul Fitte), is clearly attributable to the Mousterian of Acheulian Tradition, containing numerous small cordiform bifaces, scrapers, denticulates/notches, and Levallois flakes. Our own testing of the site suggests that little remains of the locale, although a significant area immediately adjacent to the cliff has been covered by an enormous amount of debris from the limestone quarry located on the plateau.

New excavations were conducted at this site from 2009-2012. The material is still under study, but a report on several Mousterian bone tools is available soon. More information can be found here. 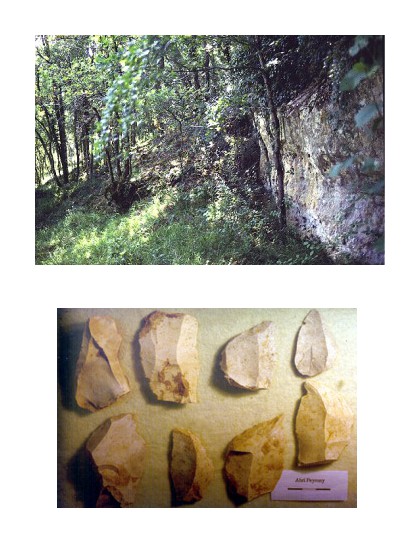