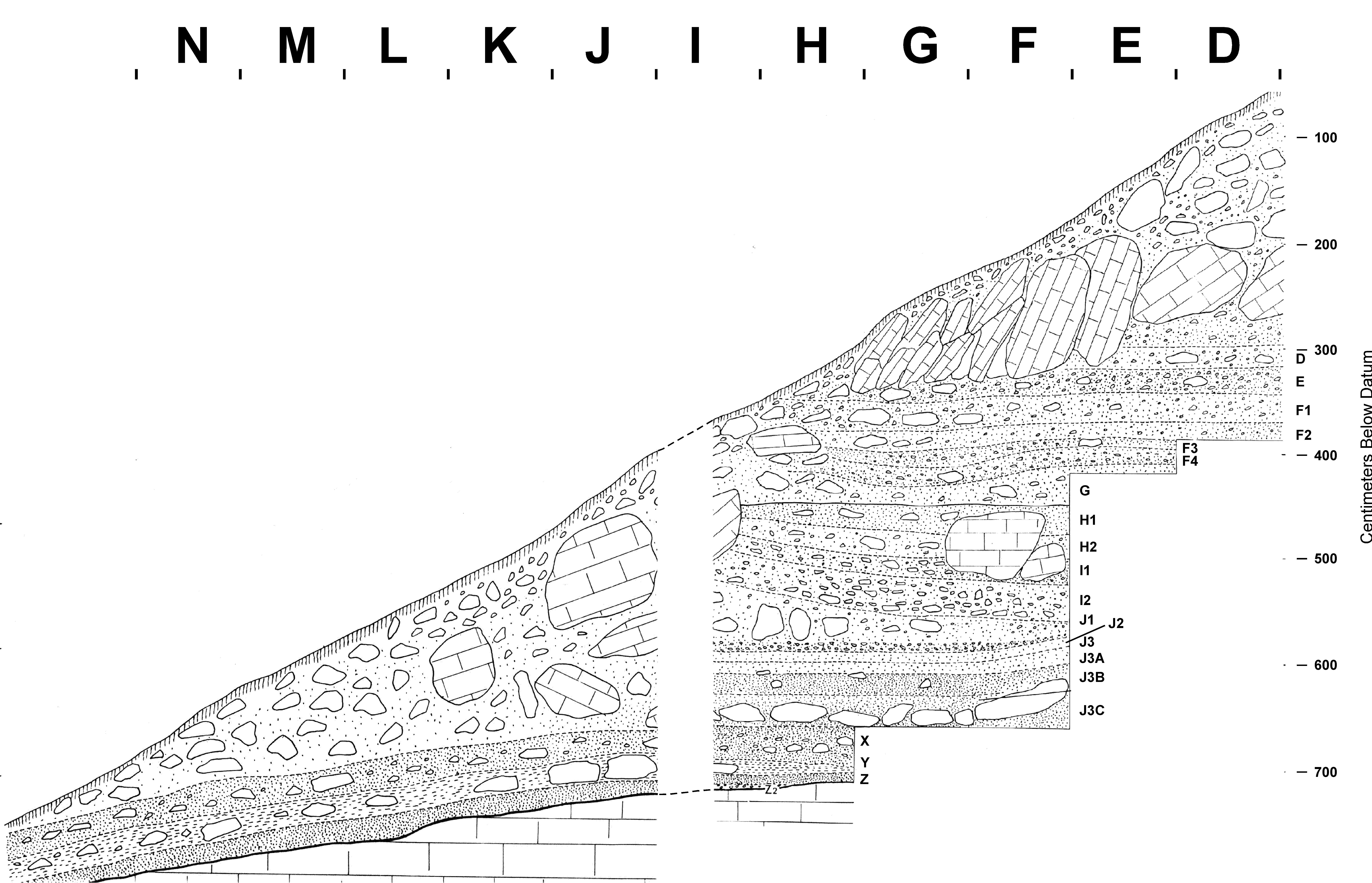 At the top of the sequence are several layers with very few archaeological remains. Sometime during the deposition of Layer B, the rock shelter completely collapsed.

Layer F, more or less arbitrarily subdivided by Bordes into four levels, F1-F4, is the richest at the site. Due primarily to the presence of a few bifaces in each of the F levels, Bordes classified these industries as MTA with a switch from Type A in F4 to Type B in F2 and F1.

Below F4 are Layers G, H1 and H2, described as sandy with scattered éboulis (or roof fall), with few stone tools. Bordes classified Layers H1 and H2 as Typical Mousterian, though Layer G was nearly sterile. Bordes felt that some of the tools identified from this layer more likely represent pockets of material derived the above layer F4.

Layers I1 and I2, on the other hand, yielded a rich and classic Typical Mousterian industry which Bordes (1975:298) described as "esthetically speaking, the most beautiful of the site." In addition to the industry, Layer I2 is characterized by numerous small éboulis. Stratigraphically the distinction between I1 and I2 is not marked, though I1 has fewer éboulis and fewer stone tools. Both layers were at times highly concretionated.

Bordes divided layer J into J1, J2 and J3 and further subdivided the latter into J3, J3a, J3b and J3c. All of the J layers are described as a fairly pliable sand with rare éboulis, a rich lithic industry, fauna, and with traces of fire. In terms of color, the top of the J3 layers is red, then it becomes more gray and finally black towards its base.

Layer J2 is described by Bordes as having been affected by cryoturbation with rounded limestone blocks and damaged flints in a sandy matrix. The effects of cryoturbation seemed to be more pronounced in the front of the cave than in the rear. Layer J1, consisting of a light red-brown sands, contained large blocks of éboulis representing another partial collapse of the shelter. Bordes characterized the industries of both these layers at Typical Mousterian though neither is particularly rich.

Bordes called the industries of J3 Typical Mousterian, but the industries of J3a-c were more difficult to categorize. They are characterized primarily by a very high percentage of Levallois flakes and very low percentage of tools. In addition, the Levallois flakes and cores in these levels are quite often extremely small. In fact, many of them fall below standard size cut-offs for analysis (2.5cm). The artifacts are so small that Bordes (1975:298) even considered the term "Micromousterian" to describe this industry, but instead settled on Asinipodian (a Latin translation of Pech de l’Azé) to emphasize that Pech de l’Azé is the only site where it is known to exist.

A layer of éboulis, representing an early partial collapse of the rockshelter, immediately underlies the J Layers.

At the base of the sequence, resting on bedrock, are three Typical Mousterian layers which Bordes called X, Y and Z. These layers consisted of multiple lenses which sometimes made it difficult to distinguish one layer from the next. Interestingly, both Layers X and Z contain traces of burning and possibly even hearths. In Layer Z, the burning appears directly on the bedrock and has left the limestone reddened and fire cracked. All three of these layers also have the highest percentages of burned pieces in the assemblage.