Levels J3a-c were thought by Bordes to represent an entirely new facies of Mousterian, what he termed the “Asinipodian,” and indeed, there are many features of these assemblages that stand out. Typologically, the industry resembles either a Denticulate Mousterian or a Typical Mousterian rich in denticulates, as there are more notches/denticulates than scrapers, and virtually all of the latter are single types. This suggests a relatively low degree of utilization of the assemblages, and this is borne out by the very low percentages of blanks to cores and of tools to flakes. One other type, however, is heavily represented in these layers, namely truncated-faceted pieces. This type was not recognized in Bordes’ analysis (not being a part of his original type-list, and it is interesting to see how he tried to deal with their classification – calling them either cores, burins, truncations, or, most often, simply “miscellaneous”). Now truncated-faceted pieces are known to occur in varying frequencies in Middle Paleolithic assemblages from all over the Old World.

Another characteristic feature of the Asinipodian, and one that was recognized by Bordes and confirmed through our analysis, is the very high percentages of Kombewa flakes and cores – the percentage of cores that are classified as Kombewa reaches a high of over 12 percent in Level J3a. What we have found however, is that truncated-faceted pieces and Kombewa cores may be part of the same strategy – two different sides of the same coin, as it were -- given that truncated-faceted pieces are flakes with removals usually from the exterior face while Kombewa cores are flakes which, by definition, have removals from the interior face (i.e., removal of the bulb of percussion). In fact, there is a clear relationship in the occurrence of these two forms throughout the sequence.

Another interesting aspect of these Asinipodian levels is the production of very small Levallois flakes, which again may be technologically related to both the truncated-faceted pieces and Kombewa cores. Bordes himself was struck by the extremely small size of these pieces – in fact, many are less than 2 cm in length. That they should be considered Levallois flakes and not the result of retouching bifaces or scrapers is first clear from the fact that bifaces are absent and scrapers are rare, but more telling is the presence of undeniable Levallois cores that are themselves extremely small: almost 10 percent of these are less than 3 cm in maximum length, and the lengths of the primary removal scar average less than 2 cm with a minimum of 1.4 cm. In other words, the flakes that were prepared and removed are smaller than what is commonly piece-provenienced according to modern excavation standards. Related to this emphasis on small flake production is the fact that many of these cores are made on flakes (it was also common in these layers to utilize a small knob of flint as a core), and, in fact, there is a whole continuum from small Levallois cores or Mousterian discs, truncated-faceted pieces, and Kombewa cores.

Although the average sizes of Asinipodian tools and flakes is more or less similar to what is seen throughout the Pech IV sequence, the small size of some of the Levallois flakes led Bordes to considered the term “Micromousterian” to describe this industry; he settled instead on Asinipodian (a Latin translation of Pech de l’Azé) to emphasize his belief that Pech de l’Azé IV was the only site where it is known to exist. In fact, however, some of these same elements do occur in other kinds of industries – the high percentage of truncated-faceting, for example, is well attested at the site of La Cotte de St. Brelade and in the Zagros Mousterian. The latter includes a number of small, radially-prepared Levallois flakes and very small radial cores as well. We also found very similar assemblages at the base of the Roc de Marsal sequence.

Finally, adding to the interest of this industry is the fact that such an emphasis on the production of small flakes does not seem to be simply a result of increased core reduction due to decreased raw material supplies. In this case, according to the models put forward earlier, we would have probably seen increased tool production and tool reduction as well, but neither of these is apparent in the Asinipodian, which indicates that relatively little emphasis was placed on creating blanks and on retouching blanks into tools. Thus, despite the fact that some Levallois cores were either made from very small blanks or reduced to such diminutive sizes, some other factor besides intensity of utilization, perhaps some as yet unidentified functional need or even a style, may be responsible. 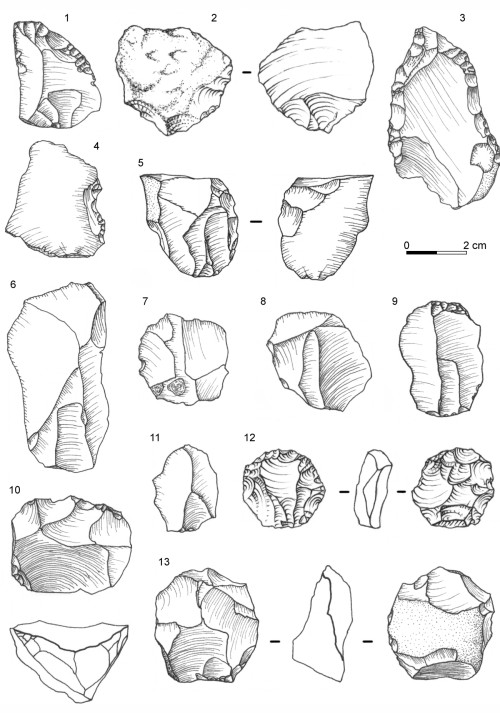